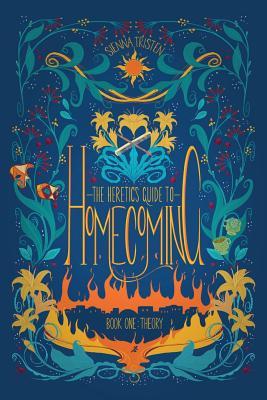 The Heretic’s Guide to Homecoming by Sienna Tristen

“Life is transformation. You change or you die.”

Ashamed of his past and overwhelmed by his future, Ronoah Genoveffa Elizzi-denna Pilanovani feels too small for his own name. After a graceless exit from his homeland in the Acharrioni desert, his anxiety has sabotaged every attempt at redemption. Asides from a fiery devotion to his godling, the one piece of home he brought with him, he has nothing.

That is, until he meets Reilin. Beguiling, bewildering Reilin, who whisks Ronoah up into a cross-continental pilgrimage to the most sacred place on the planet. The people they encounter on the way—children of the sea, a priestess and her band of storytellers, the lonely ghosts of monsters—are grim and whimsical in equal measure. Each has their part to play in rewriting Ronoah’s personal narrative.

One part fantasy travelogue, one part emotional underworld journey, The Heretic’s Guide to Homecoming is a sumptuous, slow-burning story about stories and the way they shape our lives.

I received a review copy from Molewhale Press in exchange for an honest review.

I finished reading The Heretic’s Guide to Homecoming in February of this year, and it’s honestly taken me this long to actually write a review because I simply don’t know where to start with how much I loved this book.

The Heretic’s Guide is an installment in the Shale Project, described via their website as a “multimedia storytelling initiative roughly in the shape of a planet”. I don’t know exactly how I found it, but I first blogged about it here, in June 2018. Queue me signing up for the Shale Project mailing list, requesting a review copy, and here we are about a year later. While I find the mere existence of The Shale Project fascinating and an incredibly creative way to tell stories, I was completely unprepared for how much The Heretic’s Guide would bowl me over.

This book tells the story of Ronoah, an anxious traveler who has left his home in hope of something better and embarks on a journey to the heart of his world with Reilin, a mysterious stranger who is equally as charming as he is infuriating. As the blurb describes, it’s “one part fantasy travelogue, one part emotional underworld journey”, and that is no lie. As Ronoah and Reilin travel around Shale, the reader both is greeted with lush, beautiful descriptions of their surrounding places and people and Ronoah’s never-ending anxious stream of consciousness. Seriously, y’all, this man was both deeply relatable and also mildly concerning. I wanted to give him a hug for the entire book.

Ronoah, after his brief stint of resolve, had returned to his regularly scheduled anxiety.

I think it’s this combination that really cemented The Heretic’s Guide as a favorite. I’m a big fan of intense worldbuilding (oh my goodness is it intense), and while the story could get a bit description-heavy at time, Sienna Tristen’s writing is so freakin’ gorgeous that it never feels like you’re reading a textbook. It’s just beautiful descriptions of rolling hills and desert caverns and bustling port cities that you can’t help but want to visit.

“Right,” Reilin said, and Ronoah looked up at him because his voice had changed again and suddenly it sounded clear and young, hushed with breathless anticipation. It made his own heart kick in a way that made him more excited than nauseous. The man rolled his broad shoulders in their sockets, gathering the reins in his hands. He was staring intent at the horizon, the blue canvas of the eastern sky, the rip and rupture of the sun. His face was unreadable, sort of like a question and sort of like an answer and sort of like a challenge and yet none of those things at all. “Off we go, into the glorious unknown.”

And the characters! Oh the characters. I fell in love with every single one of them. Some of them are only in Ronoah and Reilin’s journey for a brief part of the book, but they’re all so incredibly three-dimensional and well-characterized that you wish they were there for longer. And they all have a part to play: every single side character, random merchant, et cetera has a point in both showing Ronoah’s personality and adding to his own journey in such interesting ways. My favorites, however, were definitely Hexiphenes (Local Boy Wears Eel Like Scarf, More At 7), Ronoah himself, and Reilin. The scene towards the end where Reilin just tells Ronoah all the good things about him and his character that Ronoah refuses to accept was SO GOOD and made me cry maybe. I love these two so much!!

“We are all bigger than ourselves. We all contain multitudes. Mine are a tad more literal than yours,” he allowed, tilting his head, “but yours exist nonetheless. You’ve said it yourself. You are Genoveffa. You are fire and hyenas and baboons and a thousand things besides. You are certainly complicated enough to be more than one thing at once, so let yourself be more. You have considered the bad, and that has given you the insight on what there is to fix – now for goodness’ sakes, consider the good, and give yourself the tools to fix it.”

Honestly, I don’t even know what else to say about this book other than I LOVED IT SO MUCH PLEASE GO READ IT. The project behind it is amazing, the writing is astoundingly beautiful, the worldbuilding is massively fascinating, and the characters are so incredibly lovable and interesting. There were so many times as I read where I laughed out loud and then teared up immediately after, and I’m so so very excited for the sequel to destroy me yet again! (I can and will reread this one at least 20 times before it’s published please do not try and stop me.)