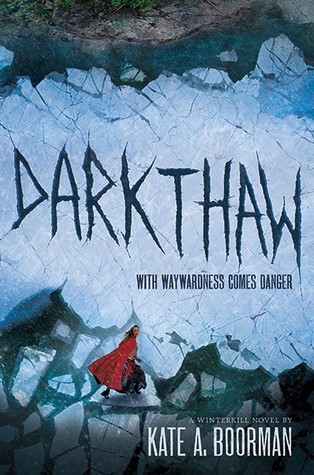 Darkthaw by Kate A. Boorman

For as long as Emmeline can remember, she’s longed to leave the isolated world of the settlement and explore the wilderness that calls to her in her dreams. And now that the Council has fallen, she will finally, finally get that chance. With First Peoples guide Matisa at her side, Emmeline rallies a brave group to join her on her quest into the unknown, including her beloved Kane and his two younger brothers.

But the journey soon proves far more dangerous than Emmeline anticipated—with warring clans, slavers, colonists, disease, and natural disasters seemingly at every turn. After putting so many lives in danger, she starts to doubt everything she once knew. Did she make the right choice to leave the settlement—and can her relationship with Kane survive the ordeal? Matisa insists that to set things right and to fight the evil that is bringing all this danger and turmoil to the forest, Emmeline must journey to Matisa’s people—even if that means leaving Kane behind.

I received this book from ABRAMS Kids, Amulet Books, and NetGalley in exchange for an honest review.

Darkthaw  by Kate Boorman was indeed an interesting read. It was filled with very beautiful writing, conflicted characters, and peculiar influences. I won’t say it was my favorite read, but it was certainly unique.

I actually didn’t realize that this was a sequel to her first novel, Winterkill, until afterwards, but the book still wasn’t much of a problem to understand. Emmeline, or Em as she is known, lives in a settlement that, until recently, believes they are the last people alive. They had recently been plagued by a sickness that they believed was from a monster, but then Matisa, Isi, and Nishwa, some of The First People, come along and explain that it was from a river. Matisa has been dreaming of a great danger, and believes that she and Em need to stick together. Em at first is torn between her love, Kane, at the settlement, and the promise of adventure with her new best friend, but her own dreams call her with Matisa. (Eventually Kane comes with her, along with some of the other settlers.)

The whole “dream” thing was very interesting- you could tell that dreams were considered important in their society. The First People also relied on dreams to guide their path- Isi and Em end up bonding over Isi’s dreams.

The world that Ms. Boorman created was incredibly involving- it immersed me from the very beginning. I was drawn into her aspects of their adventures in the land immediately. The colonial aspects were also very cool- the Dominion are trying to settle the land, like England. Basically. The settlement and the slave-camp

While the world was my favorite part, I can’t say the same for the characters. They all seemed fairly three-dimensional, but they just weren’t exactly interesting. I liked them…but in the “I-don’t-think-I’d-care-if-you-died” kind of way.

Also, the formatting on my Kindle Touch was kind of really bad- the picture things that would go with the start of each chapter were randomly scattered throughout the book. 😦

So. Bottom line? If you liked the first book, you’ll probably like this, and either way you could read it. But read it for the world, not for the characters.

5 thoughts on “ARC Review: Darkthaw by Kate A. Boorman”